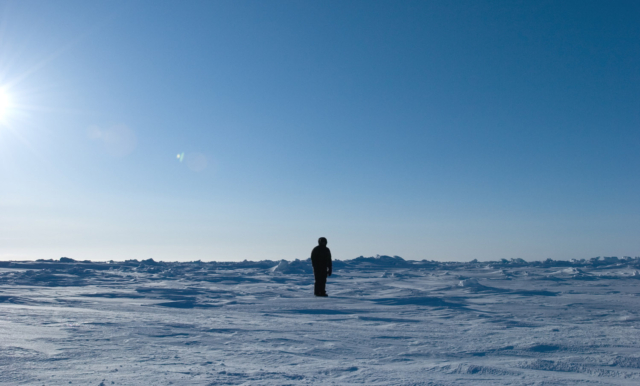 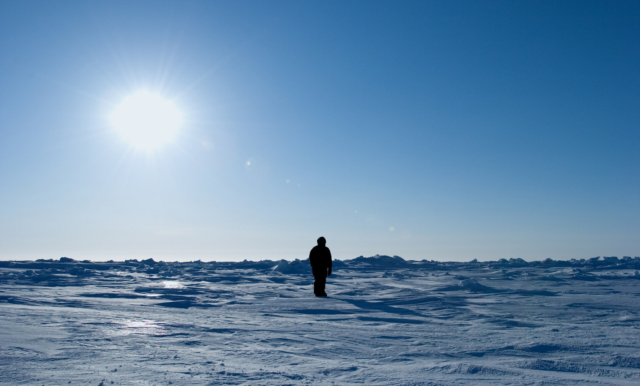 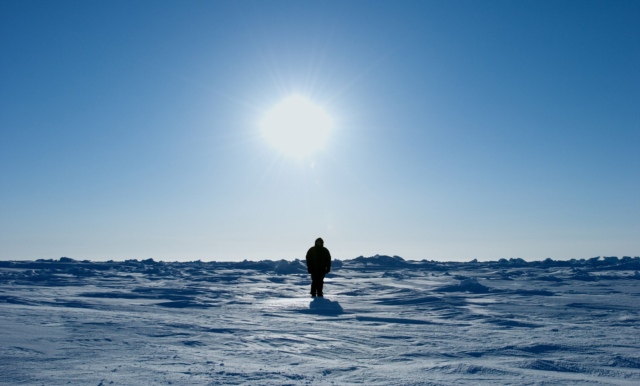 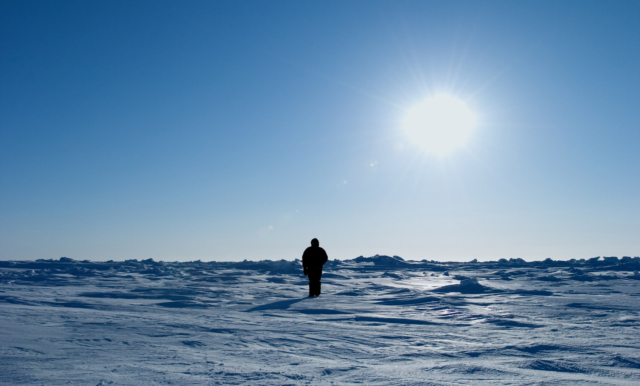 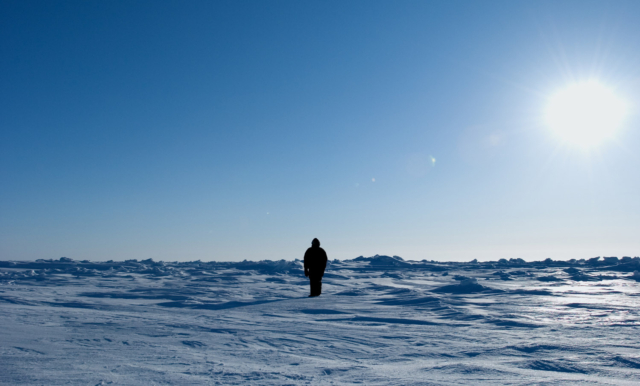 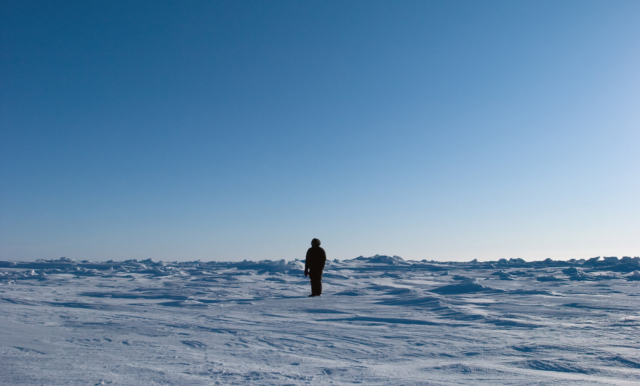 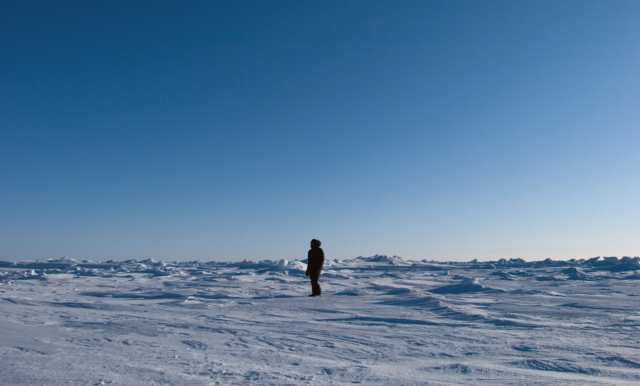 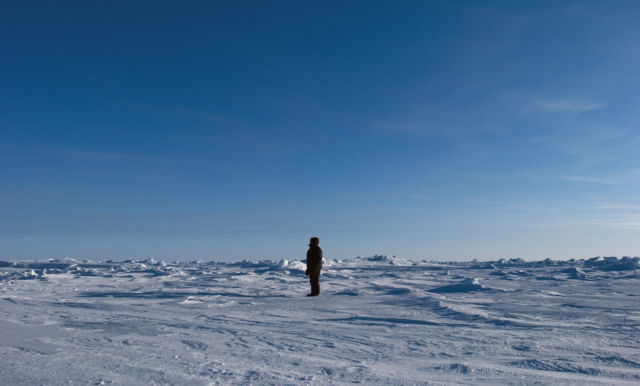 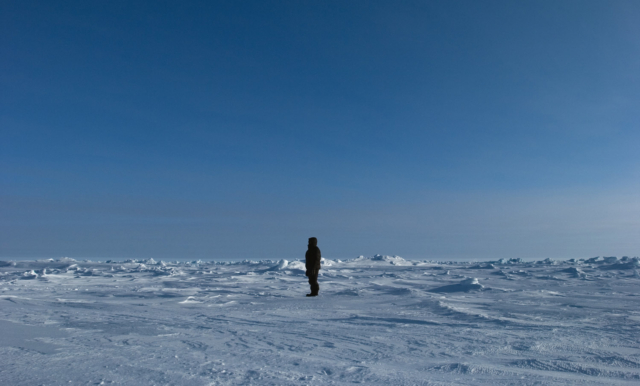 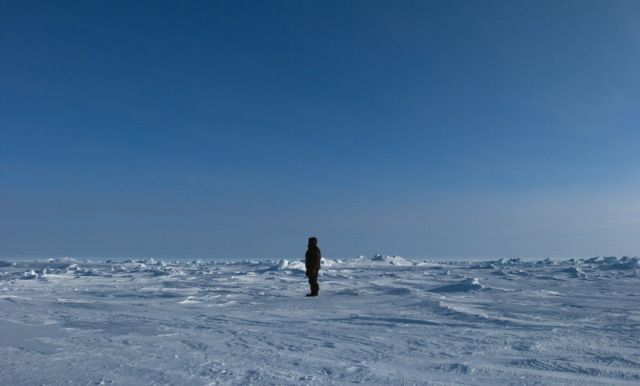 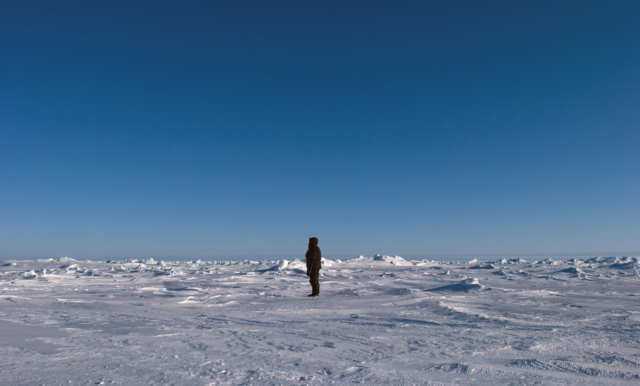 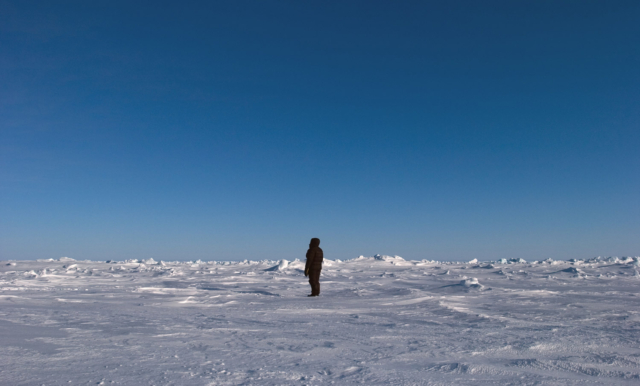 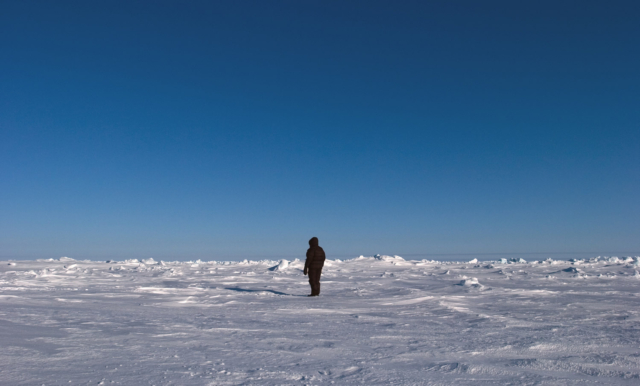 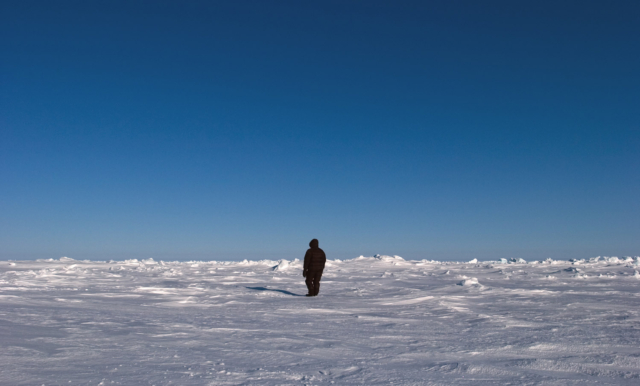 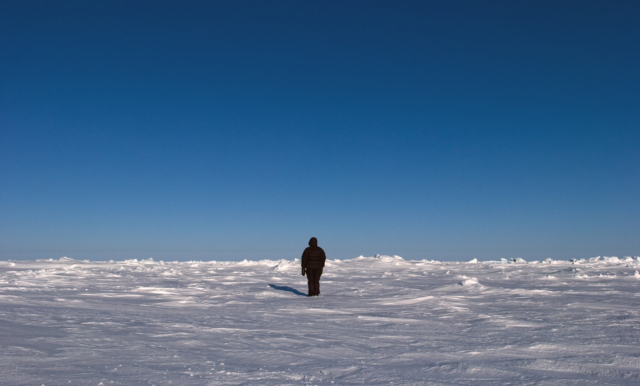 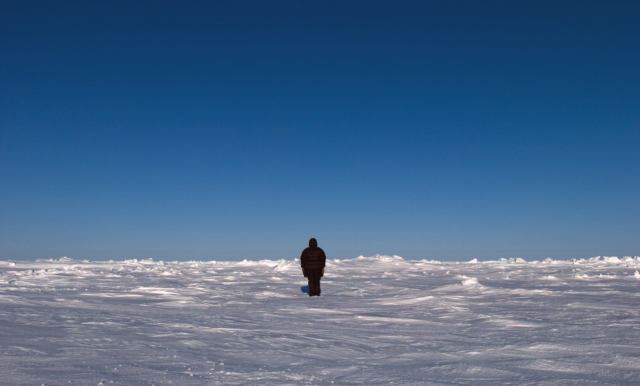 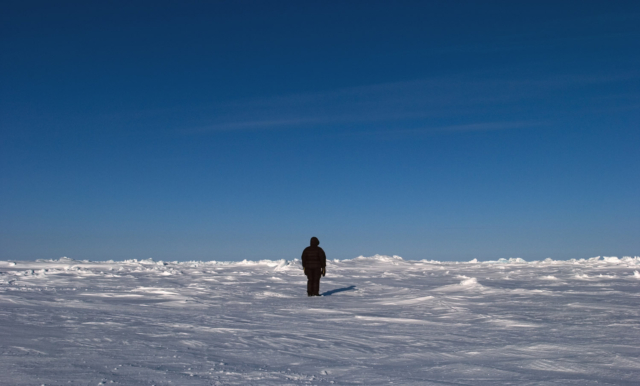 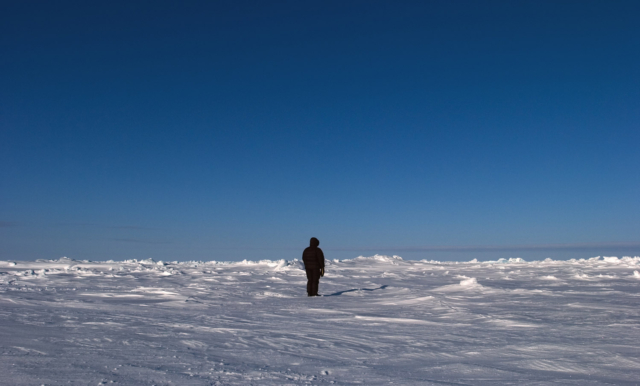 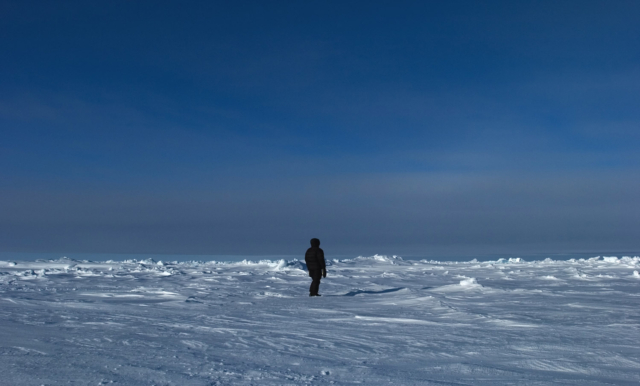 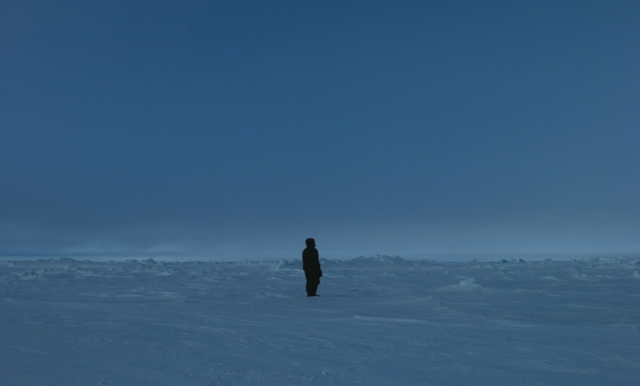 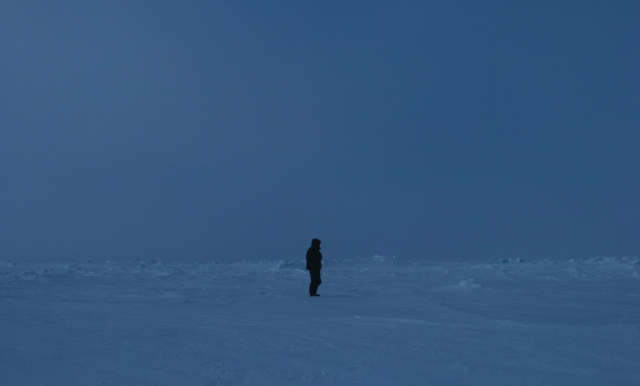 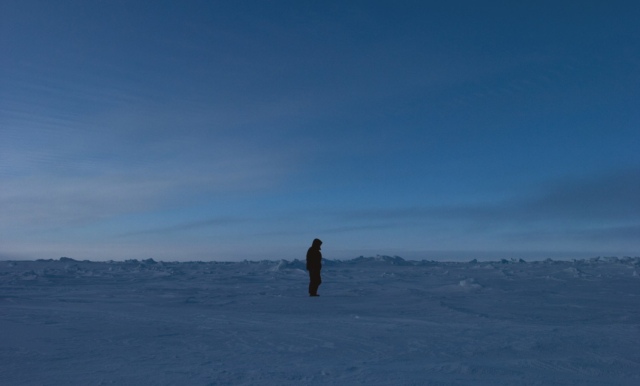 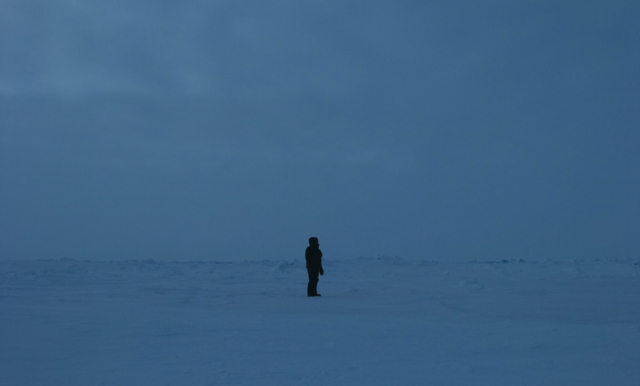 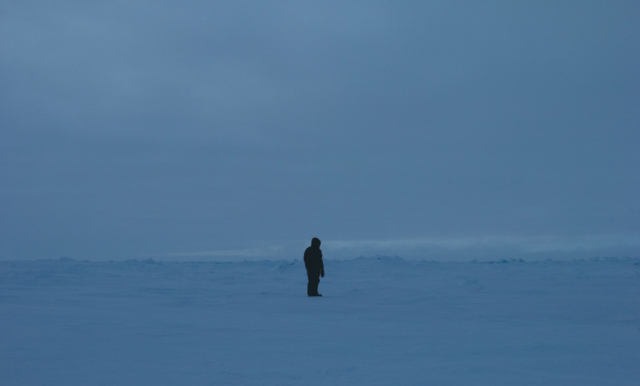 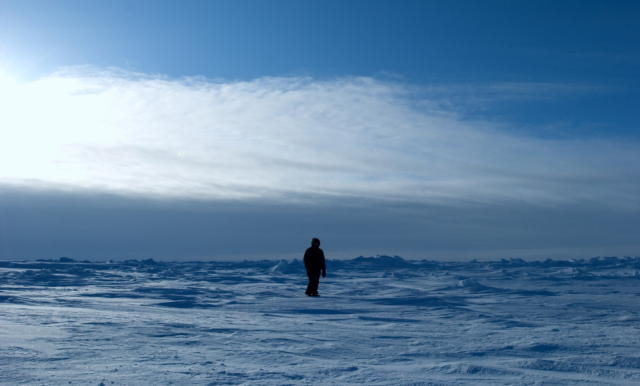 “FOR TWENTY-FOUR HOURS, starting on April 28, 2007, our blue planet went one way and Guido van der Werve went the other. Compressing that day into eight minutes and forty seconds of time-lapse photography transferred to high-definition video, Nummer negen: The day I didn’t turn with the world, 2007, shows the black-clad Dutchman standing on tundra at the North Pole, dwarfed–in the static composition–by blank icescape and endless blue sky. Making gestures that semaphore frozen discomfort, the artist slowly shuffles clockwise. Meanwhile, as evidenced by the sun’s accelerated passage from left to right behind him, the earth spins counterclockwise on its axis. Accompanied by low bursts of arctic wind, a rhapsodic and rambling Chopinesque piano etude tickles our ears throughout: van der Werve, an accomplished classical pianist, playing one of his own compositions. In watching and listening, interpretative thought turns schizoid. The worldly half of me understands that Nummer negen takes some beating as an overripe analogy for away-from-the-pack contrarianism, with its outmoded, Caspar David Friedrich-indebted conception of the solitary sublime. But the other half–the unhip half, which responds almost involuntarily to gestures that evoke both human insignificance and our contrary potential to broach self-knowledge by communing with vastness–that side is seduced. Conflicted? Absolutely, and I have to assume the artist who engineered this balancing act is too.”