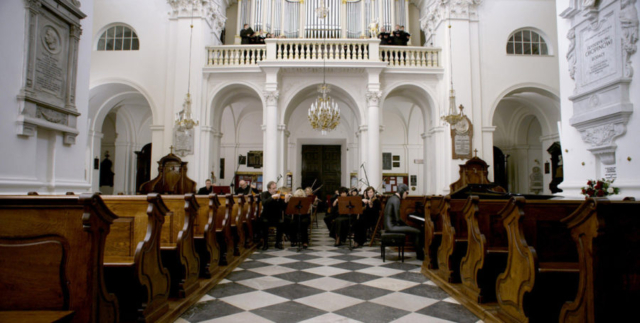 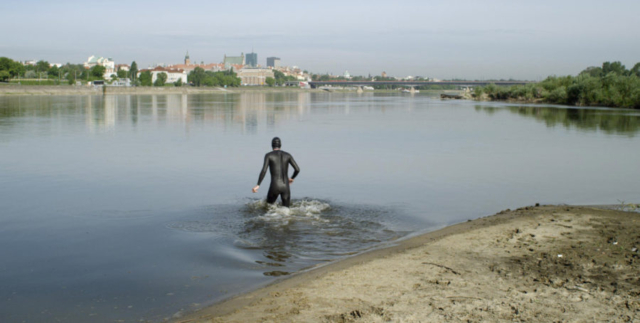 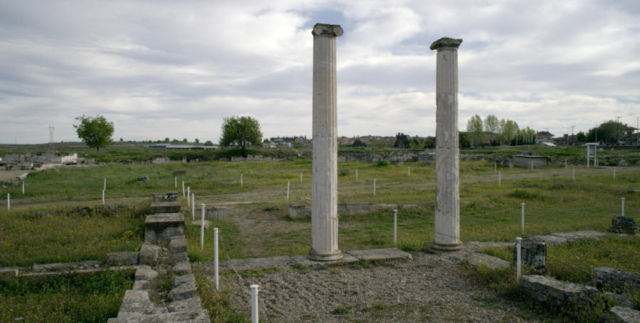 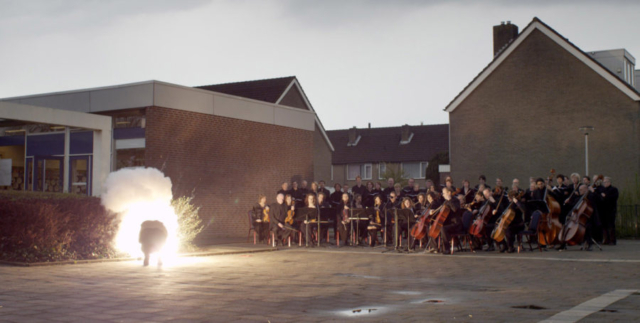 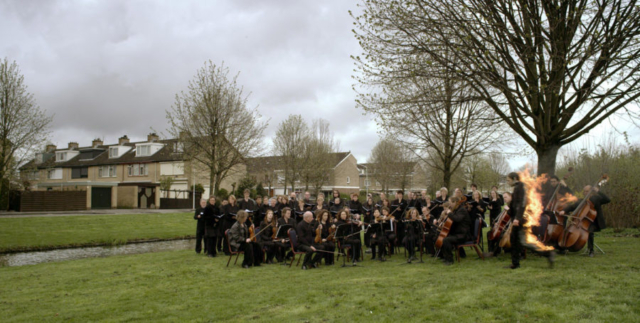 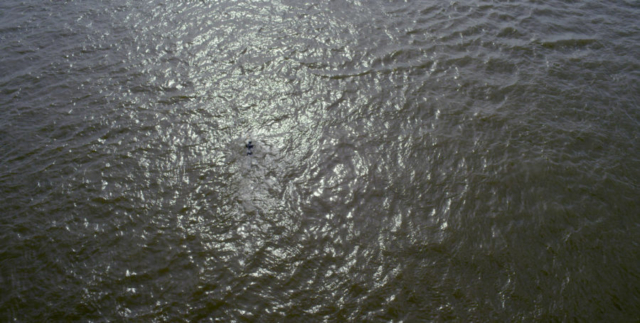 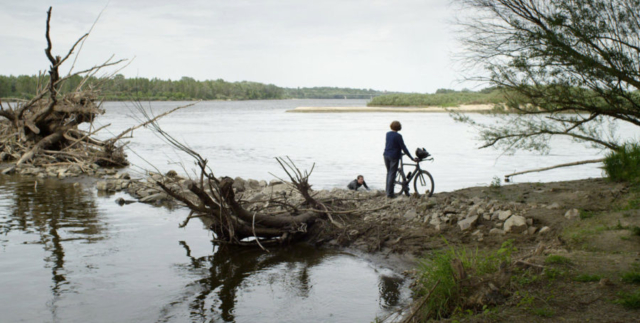 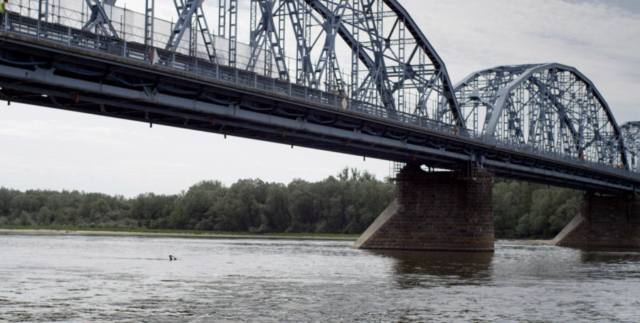 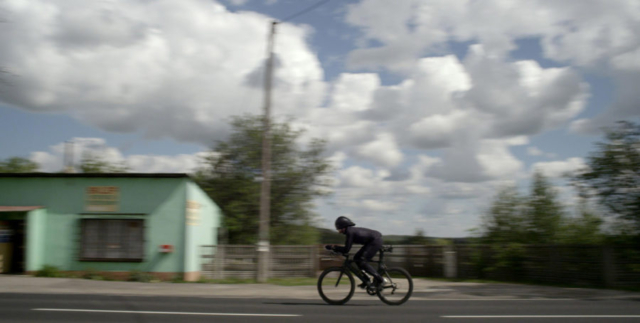 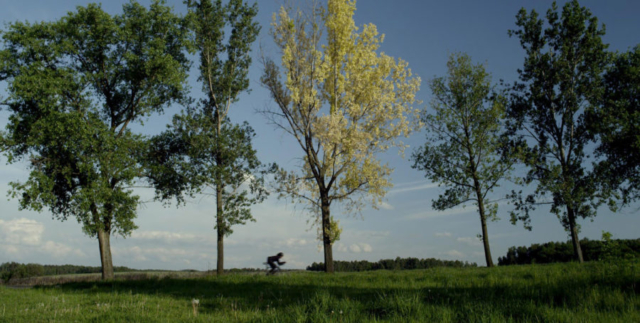 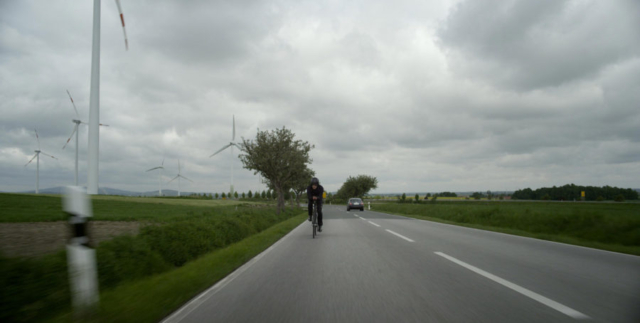 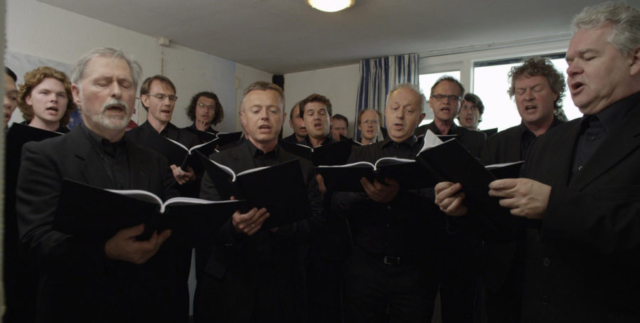 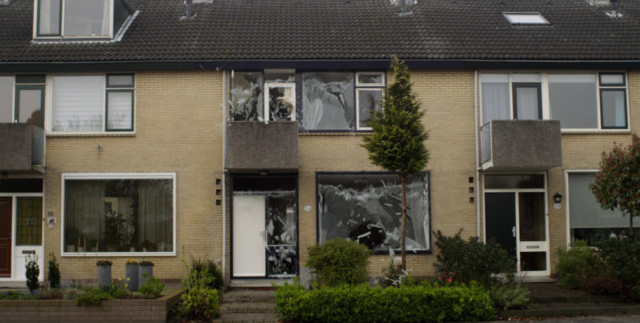 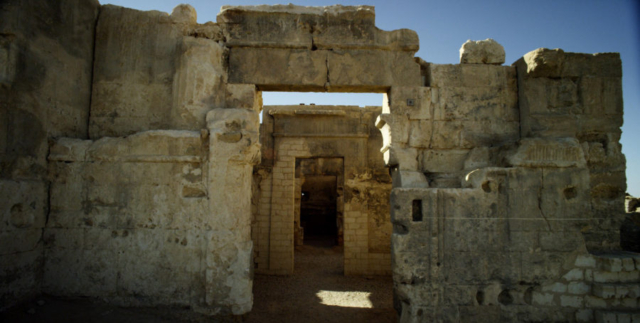 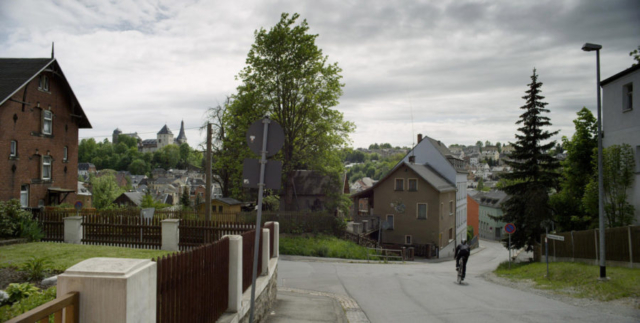 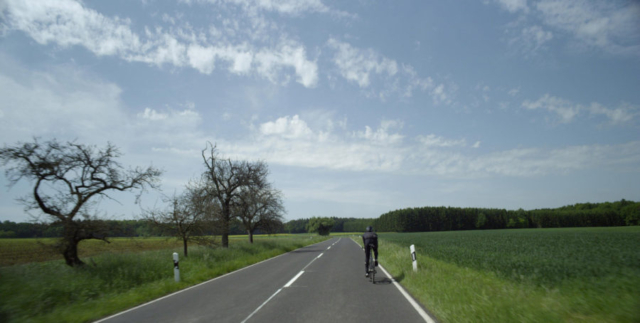 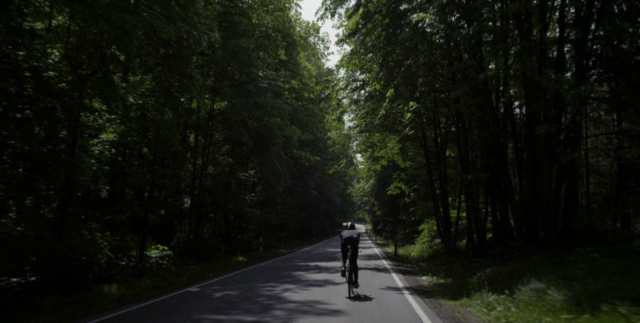 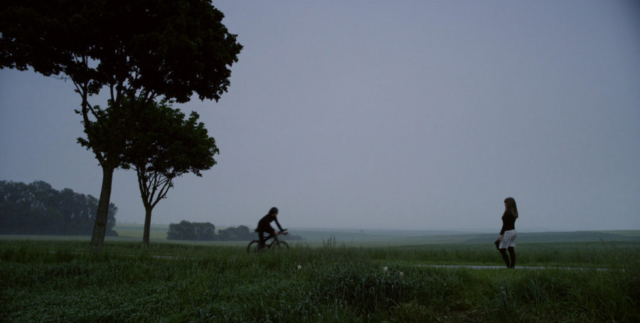 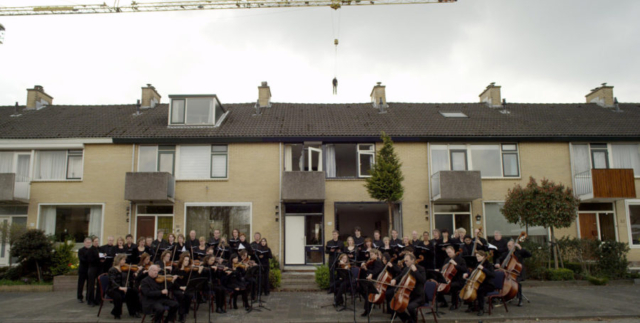 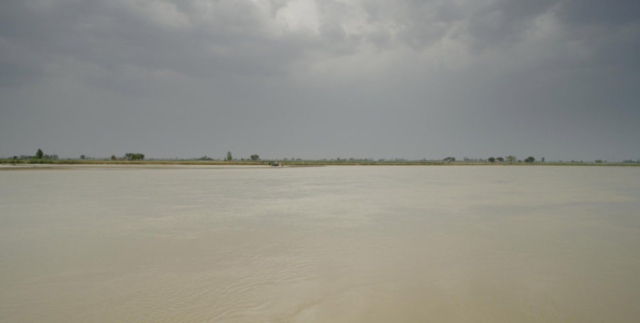 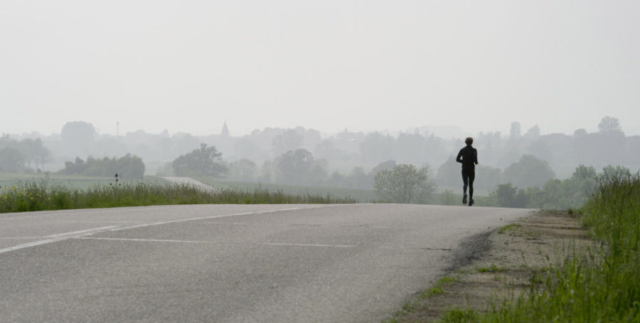 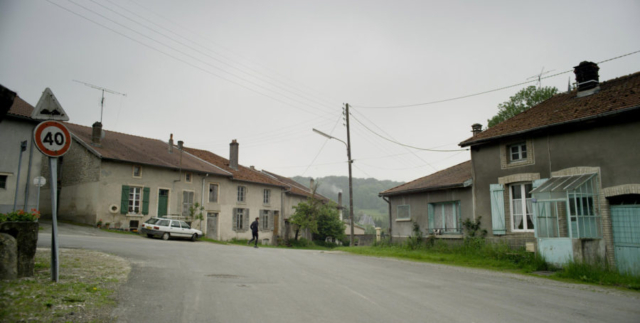 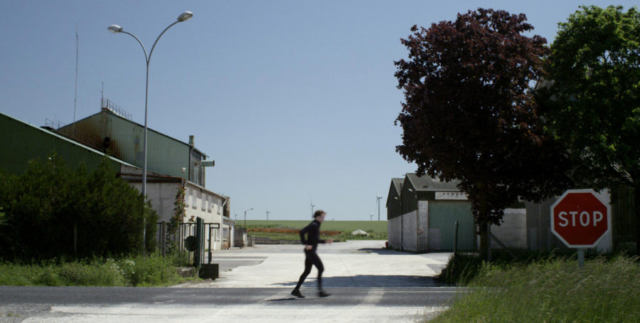 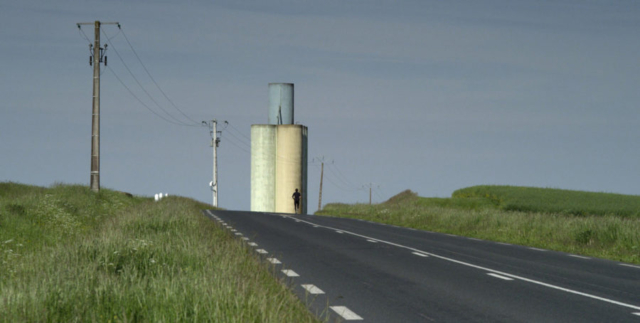 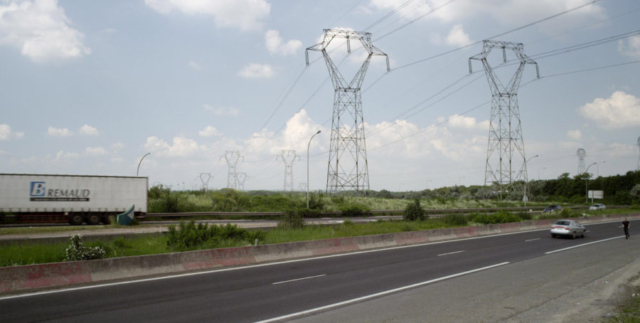 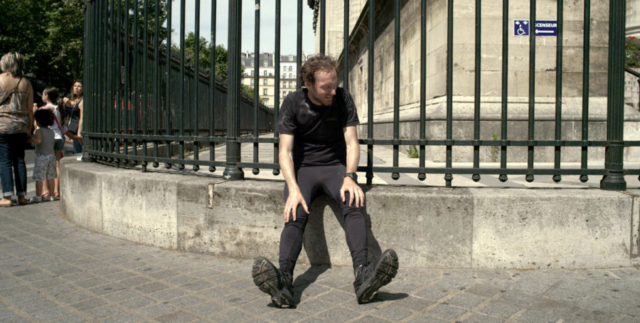 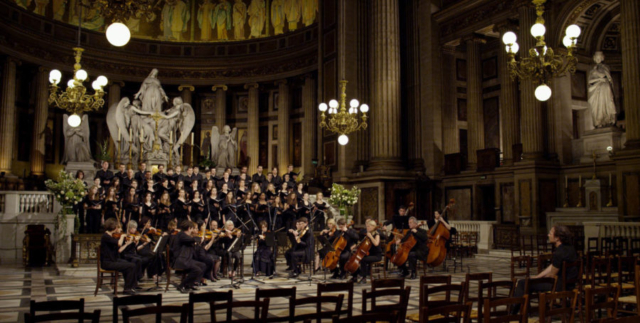 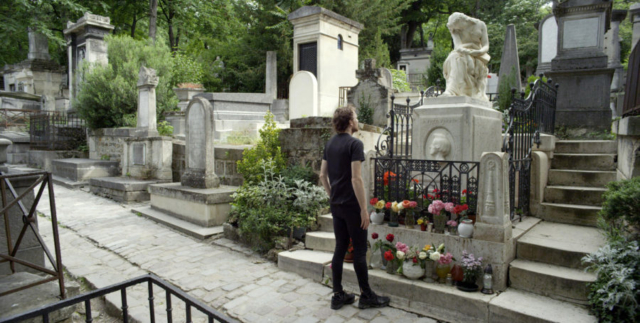 “Triaesthete; In his film Nummer veertien, home, the Dutch artist Guido van der Werve runs, bikes, and swims nearly 1,200 miles from Warsaw’s Church of the Holy Cross to Paris’s Père Lachaise cemetery. It’s a cinematic vision, 54 minutes long, gorgeously melancholy, occasionally flakey, intermittently batty, about longing, homesickness, submission, and death. For Père Lachaise is where Frédéric Chopin is buried—except for his heart. In October 1849 (immediately after his death), Chopin’s loving sister Ludwika fulfilled her brother’s wish by smuggling his heart out of Paris and interring it in that Warsaw church. Van der Werve makes the trip backward, triathlon-style, adding strange scenes about Alexander the Great’s journey from Macedonia to his final resting place in Babylon. He incorporates passages in which he himself catches fire, is blown up, or is suspended in a harness from a crane high above a suburban home. Talk about the beauty of excess, returning to the cosmic womb, and mad Romanticism: Picture the untamed imagination and astral atmospherics of Werner Herzog, the hushed hazy landscapes of the seventeenth-century Dutch master Aelbert Cuyp, and an abstract geography of pathos.
He weaves Chopin’s sad story with his own lonely endurance test, scoring it all with a requiem in three movements that he wrote himself (he was trained in music and composition at a conservatory). At the start, we see Van der Werve wearing a wet suit and goggles as he sits and stares in that Warsaw church. Soon an orchestra plays and a choir sings dirgelike music. Next, Van der Werve nonchalantly gets up, walks out of the church, and starts running. Fast. In lingering panoramic shots we see him crossing streets and bridges. He swims long, fast-flowing rivers, runs past factories, switching at one point to a waiting bicycle. He crosses the border of Poland into Germany, loping through forests, moving alongside the Autobahn and into French Alsace. Finally he reaches Paris looking frazzled and ragged. He sits on a ledge by a busy city street, gathering himself. He then approaches Chopin’s grave, placing a chalice of dirt we’ve earlier seen him dig from the garden in Chopin’s birthplace back in Poland. This final “act” is titled “I don’t feel the pain anymore,” cryptically echoing Chopin’s last words. More mad Romanticism!
Seeing Van der Werve push himself beyond comprehension, following his own inner Odyssey, haunted by incomplete histories, inconclusive futures, blind drive, and some ecstasy of sacrifice, brought me to a speechless standstill. This nonnarrative incantation brings to form a complex set of powerful feelings, memories, histories, mythologies. It isn’t strictly art. Or film. Or a mutant Ironman triathlon. It’s poetry. Indeed, as Van der Werve, 35, has said, “I’m not trying to be an artist or to make art” and “Art was never really my thing.” Unafraid of Romantic leaps of faith, he talks about melancholy, daydreams, nostalgia, the “beauty in failing.” The first time I saw his work, in 2007, I was mesmerized. The film Nummer acht: Everything is going to be alright pictures him from afar walking on a Finnish ice field, directly in front of an enormous icebreaking ship. In another nine-minute film, he stands on the North Pole for 24 hours turning against the Earth’s rotation, seeming to step outside time. In still another work, he plays Chopin on a piano atop a raft floating in a lake: It’s not quite Fitzcarraldo, Herzog’s film in which a massive ship is hauled over a mountain, but it silenced me.
I’ve struggled with my own inner Romantic, the testosterone-fueled blowhard who longs for big emotions, exotic places, mysteries, states of disconsolate pining. Often that’s led me to the brink of blowsy bathos, pretentiousness, and melodrama. Stretches of Van der Werve’s work do tip into grandiosity, solemnity, snootiness. Van der Werve is unafraid of going for this sort of sublimity. Through the mitigating tools of skepticism, a Buster Keaton deadpan, a sense of the absurd, and, most of all, a fantastic feel for irony, he reaches a crystalline vision that, as he says, makes “heavy things lighter.” And palpable.”